The next candlestick pattern that we will learn is a Marubozu. This Japanese word Marubozu means 'Bald head'. Remember what we have learned earlier about a candlestick. It consists of a real body and wicks or popularly called upper and lower shadows. This particular type of candlesticks pattern doesn't have wicks. So, let us understand the concept more deeply and learn how a Marubozu candlestick pattern is formed.

What is a Marubozu candlestick pattern? 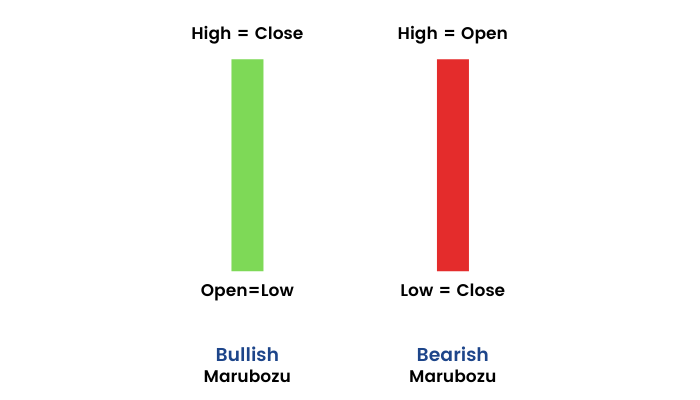 A bullish Marubozu indicates that there is strong buying interest in the stock that the bulls were willing to buy the stock at every price point during the day, so much so that the stock closed near its high point for the day. Prior trend does not hold too much importance here. The price action on the Marubozu day suggests that the sentiment has changed and the stock is now bullish.

A bearish Marubozu indicates that there is so much selling pressure in the stock that the market participants actually sold at every price point during the day, so much so that the stock closed near its low point of the day. It does not matter what the prior trend has been, the action on Marubozu day suggests that the sentiment has changed and the stock is in the hands of the bears.

I shall again stress on the fact that a bullish or a bearish trade based only on the Marubozu candle should be avoided and should be confirmed with other technical indicators also.

This candlestick is more commonly used by the traders to understand the overall market sentiment rather than standalone trade.