Gold is a precious metal that has a special place in all our hearts. Who doesn’t like gold? From owning gold jewellery to having gold bars or coins in the safe deposit box, there’s something about gold which makes us feel secure. When it comes to the yellow metal, there are a lot of interesting things to know.

A brief history of gold

Gold has been used since ancient times for making jewellery and coins. Its supply was limited due to the hardships of digging it out of the underground reserves, which led to its higher value – thus earning the title of ‘precious metal’. It was used for trade and stored as wealth.

Slowly, paper currencies and coins made of less precious metals replaced gold. However, gold did not lose its popularity. People still love gold and consider it a mode to store their wealth.

As a country, the United States of America was the first country which started keeping gold as a reserve. Over the years, USA gathered 75% of the world’s gold, which had significant effects in strengthening the US Dollar as a currency. Following this, most countries started fixing their currencies against the US Dollar, making it one of the strongest currencies in the world. Soon, many other nations linked their currencies to gold prices.

The demand for gold

Gold not only has financial value, but it has deep emotional and cultural values attached to it. People of different countries accumulate gold for different reasons, which are strongly influenced by the economic, social and cultural factors. For example, in India and China, the bride is given a significant amount of gold jewellery as a part of the wedding gift.

The primary sources of demand are:

According to the World Gold Council, the total gold reserves is around 31,695 tonnes (September 2021 data) out of which more than 75% is owned by only 10 countries.

Let’s take a quick look at them: 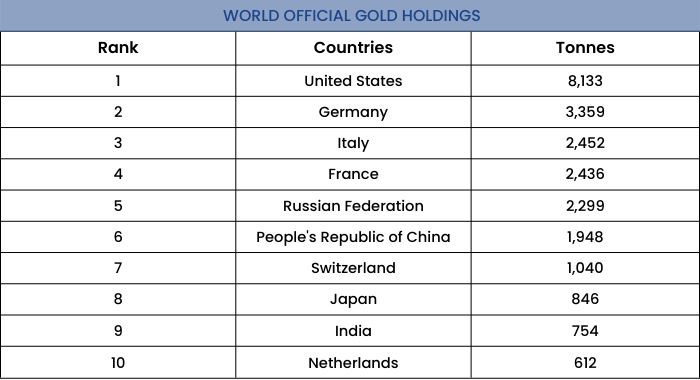 Why do countries maintain gold reserves?

Gold is a universally accepted currency, which does not require any third-party guarantee. Unlike currencies like the US Dollar which has to be guaranteed by the United States government or Indian rupees which is backed by the Government of India, gold is worth something everywhere.

Central banks of various countries hold gold reserves as a kind of insurance policy so that in the case of any unforeseen circumstances, they can trade gold. For example, if tomorrow, the US Dollar declines dramatically in its value, the US government can sell gold to buy the dollar and provide support to the value of the dollar.

Central banks keep increasing their gold holdings so that if inflation rises, and goods become more expensive, the gold holdings can support the economy of the country. Higher gold reserves bring credibility to a country. This is the main reason why the USA and other developed countries hold large reserves of gold.

Why is gold so valuable?

Finally, let’s summarize and list down the reasons why gold is so valuable:

1. It has historic, cultural and emotional value.
2. It is difficult to mine, hence although it is available in plenty, the supply is limited.
3. It is demanded by different people for different reasons.
4. It has economic significance.
5. The value of the US Dollar is linked to gold reserves and prices.