What is a Morning Star Candlestick Pattern?

A morning star is a candlestick pattern that is made of three candlesticks. A morning star is formed after a downtrend, signaling the start of an upward movement of the price. It signals a bullish reversal in the prior price trend. It is a rare pattern on charts.

The 1st candle is a long big red candle which signifies continuation of the prior trend. The second candle in the Morning star opens gap down, and is a small real body candle. It's normally a  Doji or a spinning top. The colour of the second candle is not important. The real body of candle 1 and candle 2 should not overlap each other. The third candle opens gap up and is a long bullish candle. Again the real body of the second and third candle should not overlap.

If we remove the second candle from between, the relationship between 1st and 3rd candle is that of a bullish engulfing pattern or a piercing line pattern. Volumes should be high during these candle formations. 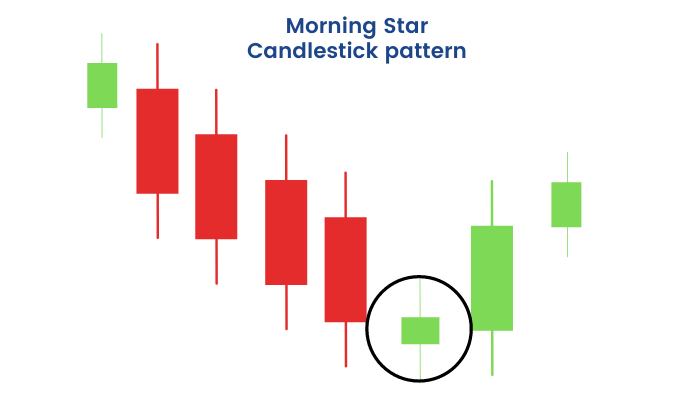 The current market sentiment is bearish, and the prices keep on making lower lows. When the first candle of the morning star forms, this bearish sentiment holds one.

When the second candle is formed, then the market sees another bearish day as the candle gaps down. As the market has gone down quite a lot, they start assuming that the reverse must be coming, as it has continued down for some time. Due to this, the buying pressure increases and it makes it harder for the bears to continue pushing the prices down. The market closes around where it opened, and thus creates a Doji or a spinning top candlestick pattern.

The third-day candle confirms that the bulls have taken control over the prices. The market opens gap up and more people are expecting the trend to reverse. Due to this sentiment, the third candle is a bullish candlestick.

The confirmation of the reversal signal is given by the third bullish candle itself. Once it is clear during the session that the third candle will close higher and relationship between 1st and 3rd candle would be that of bullish engulfing or piercing line, a long trade can be initiated. Stop-loss can be placed at the low of the second candlestick.