The next candlestick pattern we will learn is a Shooting star. Imagine a falling star from the sky. How does it look? It is very similar on the technical charts as well. So, let us dig deep into this pattern and understand it thoroughly.

What is a shooting star candlestick patterns?

A shooting star is a candlestick pattern that forms when the price of the security opens and rises but then closes near the open price. The distance between the highest price and the opening price should be more than twice as the shooting star’s real body. It usually occurs at the end of an uptrend and gives us a signal of a bearish reversal. Volume must be high on this candle. The colour of the real body is not important. 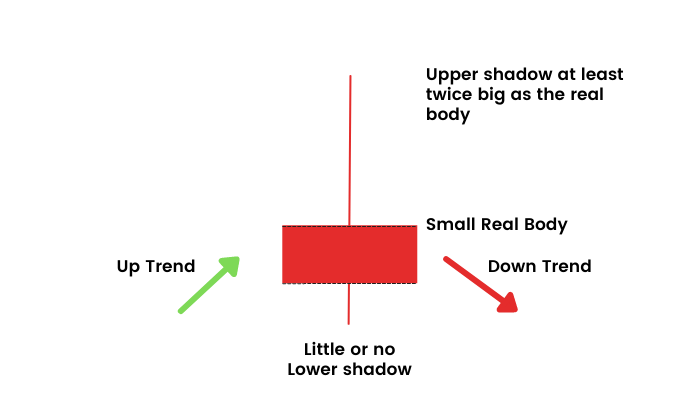 A shooting star is a bearish candle, as it is formed after a run up in prices. It explains high volatility and profit booking at higher levels. It is formed when the bulls send the price higher than the opening price, and the bears then push it back down before the market closes. If a shooting star is formed, it means that the market has seen some sell off from the smart hands at higher levels. If it is formed after a large uptrend, accompanied by high volumes, there is a high possibility of a potential trend reversal.

Confirmation of this candlestick pattern occurs when the next candle. If after an uptrend, a shooting star is formed, the next candle closing below the low of the shooting star candle will confirm a possible bearish reversal. Volumes must be kept in mind to take any action. The shooting star candles should be accompanied with high volumes. Always consider other patterns and indicators, to confirm the signal, and make sure that you do not deviate from your trading plan and risk management strategy.