It is another type of chart pattern which we will discuss in this unit that depicts the shape of the cup & handle in a price chart.

What is Cup and Handle Pattern?

Cup and Handle pattern is one of the most important chart patterns to identify multi-bagger stocks. They normally give multifold returns.

The Cup is usually U-shape and the handle is basically the retracement from the prior top to about 1/3rd of the vertical height of the cup and looks quite similar to a bowl. This pattern simply shows a period of consolidation followed by a breakout.

Cup and Handle pattern can be seen both as a bullish continuation or reversal pattern.

A continuation pattern is formed when there is a prior uptrend, followed by a consolidation in the form of Cup and Handle pattern and then the uptrend continues post breakout. 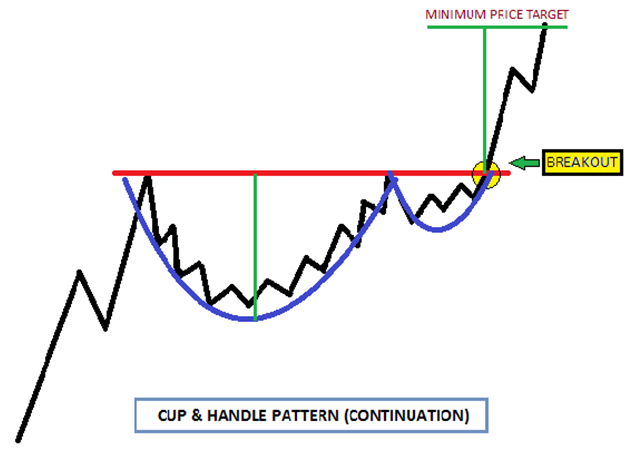 On the other hand, reversal pattern occurs after a prolonged downtrend and reverses the prior trend. 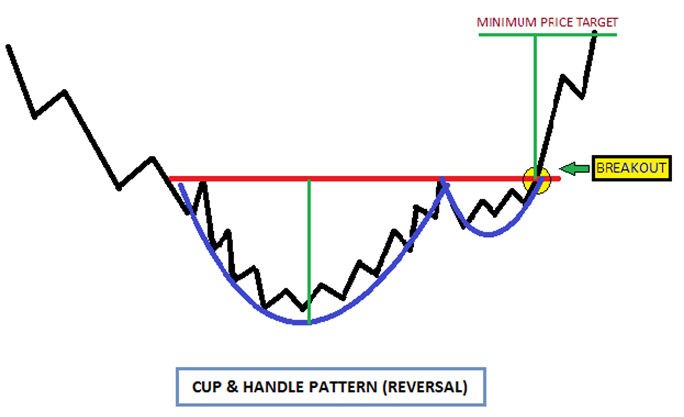 This can be formed in any timeframe from few minutes to weekly and monthly charts. However, higher the timeframe, better the chances of success post breakout.

How to interpret this pattern?

The Cup is usually “U” shaped and may be considered as a rounding bottom with almost equal highs on the either side. However, a “V” shaped cup also qualifies as a Cup and Handle pattern but the conviction is higher in “U” shaped due to the consolidation at the bottom.

The smaller the pullback, better is the strength of the formation and higher the possibility of breakout.

The breakout from the handle’s resistance should be accompanied with increased volume thus confirming the same.

Let’s understand this pattern with help of examples.

Scenario 1: As a Continuation pattern

This is an example of Cup and Handle as a continuation pattern in Nifty news which was formed in a span of about 2 years. The index witnessed breakout from the pattern along with a gap up which confirmed further strength.

The minimum target shown by a vertical blue line (distance from high to bottom of the cup) got achieved in less than a year’s time.

Scenario 2: As a reversal pattern

This is another example of Cup and Handle pattern as a reversal pattern which was recently formed in Dhampur Sugar. 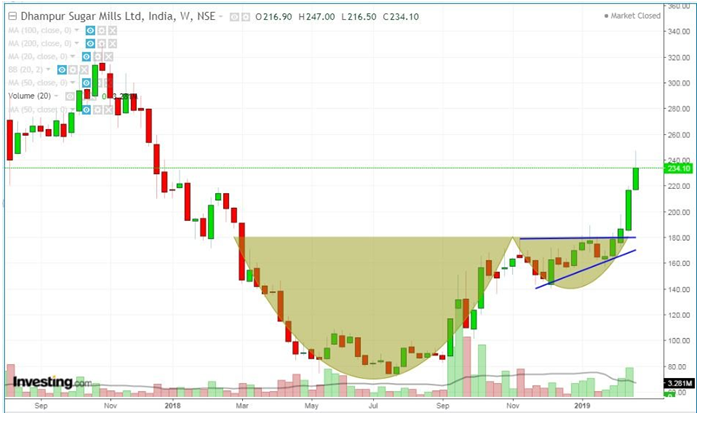 The projected target from the breakout is usually the vertical distance from the high to the bottom of the cup.

Traders may place stop loss at the lowest point of the handle and may trail it to recent swing low as the stock makes a higher high within the consolidation area of the handle; depending upon the risk appetite of the trader.

The good thing about Cup and handle pattern is that it has a high success ratio along with a good risk reward. But you should not forget to place your stop loss and trail your SL as the price goes up.

Moreover, you should closely monitor the volume as the breakouts with low volume are less likely to sustain. You may also confirm the strength of breakout based on other technical parameters.