Mergers and Acquisitions (M&A) play an important role in the corporate action of a company. Here in this unit, let us learn how?

A merger is a corporate strategy that involves the consolidation of two or more companies to operate as under the legal banner of a single legal entity. A share swap ratio is decided on the basis of market prices of both the companies (if the target is a listed company). Shareholders of the target company are eligible to receive shares in the acquiring company if the merger is successful.

If a company undergoes a merger, it may indicate to shareholders that the company has confidence in its ability to take on more responsibilities. On the other hand, a merger could also indicate a shrinking industry in which smaller companies fall prey to market stalwarts.

In the case of an acquisition, however, a company seeks out and buys a majority stake of a target company's shares; the shares are not swapped or merged. Acquisitions can often be friendly but also hostile, meaning that the acquired company does not find it favourable that a majority of its shares were bought by another entity. 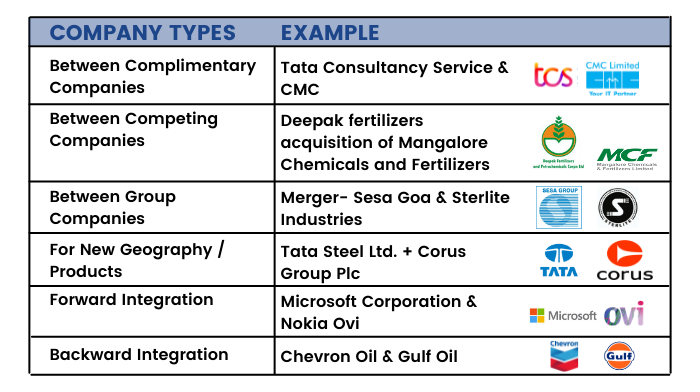 Demerger - A demerger occurs when a conglomerate that has varied business interests under a single entity hives off one or more units into a separate legal entity. Usually, the parent company hives off its non-core business segments under a different entity to improve focus on its core business and also unlock value of the other businesses which are embedded with the company. Demergers are generally interpreted positively by market analysts. Herein also, a share swap ratio is decided on the basis of which shareholders in the parent company get additional shares in the subsidiary company.

For example: - In 2009, the boards of Reliance Industries (RIL) and Reliance Petroleum (RPL) approved the demerger of the two firms, with a ratio of one RIL share for 16 RPL shares.

In 2015, the Board of Max India Ltd approved a Corporate Restructuring plan to split the company through a demerger, into three separate listed companies with three separate business verticals ‐ life insurance, health and allied businesses and manufacturing industries. The company split into three entities – Max Financial Services Ltd with the insurance business, Max India Ltd with the healthcare and allied businesses and Max-Ventures and Industries Ltd with speciality packaging film business.