Now that we have a complete understanding of corporate governance. In this section, we will discuss some common FAQs surrounding Corporate Laws & governance practices in India. The questions will range from the very basic to little complex ones so that you get a bird's eye view of the legal framework in which companies operate.

The board of directors is a group of elected representatives that represent the shareholders of the company. The board is responsible for protecting investor's interests & ensuring profitability & financial stability.

The board hires executives such as the CEO & the CFO. These Key Managerial People (KMP) are generally members of the board.

The CEO is the highest-ranking executive in the organization. He is the public face of the business. The CEO reports directly to the Board of Directors.

In a nutshell- Shareholders own. Executives possess. The board governs.

This is a controversial topic and remains widely debated. Some argue that splitting the two roles is a key component of board independence because of the fundamental differences & potential conflicts between them. Another argument in favor of the two-tier system is that the independent chairman can serve as a valuable sounding board, mentor, and advocate to the CEO. On the flipside, setting up two power-centres may impair the decision making ability of the board.

The Uday Kotak committee for corporate governance reforms has recommended the separation of the posts of Chairperson & CEO/MD for Top 500 listed entities by market capitalization with more than 40% public shareholding. The market regulator has set April 2022 as the deadline for companies to conform to this notification. It quoted the Cadbury Committee of United Kingdom:

“Given the importance and the particular nature of the chairman’s role, it should in principle be separate from that of the chief executive. If the two roles are combined in one person, it represents a considerable concentration of power”

Executive directors are those directors who are involved in managing the day-to-day activities of the company. They are usually full-time employees of the firm & are responsible for making critical business decisions.

Non-executive directors are also known as independent directors. These directors do not have any material relations with the company that might affect their independence of judgment. Additionally, he/she must not be a promoter of any of the entity's associates, subsidiaries, or holding companies.

Is there a ceiling to the number of listed entities in which a person can hold directorship?

No person can hold office as a director in more than seven listed entities.

A brief resume of the director is provided in media fillings at the time of appointment. The background & previous work experience provides insight into the director's capabilities.

Directors are appointed by the Board and hold office until the next AGM, at which their approval is subject to voting by the company's shareholders. Also, directors can be appointed at a general meeting of the shareholders.

In the case of Indian public companies, 2/3rd of the directors are liable to retire from their position via rotation within a maximum period of three years from their appointed date. The reappointment of such directors is subject to fresh shareholder approval. This provision is not applicable to independent directors.

The shareholders have the right to remove both executive & non-executive directors by a simple majority vote.

The board of directors shall meet at least five times a year. There must not be a gap of more than 120 days between any two meetings.

All Indian listed companies shall hold their Annual General Meeting within a period of six months from the closure of the previous financial year i.e. by the 30th of September. As per the recommendations of The Uday Kotak committee on corporate governance, this timeline has been reduced to five months for the Top 100 companies by market capitalization as of 31st March for the year under consideration.

The Top 100 companies are also required to webcast their AGMs so that retail shareholders can also participate. Lately, a lot of other listed companies have started broadcasting their AGM's. This is indeed a great development & is beneficial for those who cannot physically attend the meeting.

The central objectives of the board include managing the company's affairs & assets and ensuring compliance with all applicable laws. Directors of the company are expected to show utmost care, diligence & skill in the exercise of their powers. In fact, incompetencies & irregularities are treated as a deliberate act.

The Companies Act, 2013 formally brought into force an effective redressal mechanism much popular in the USA.

Under this provision, The shareholders of the company may collectively file a class-action lawsuit to claim damages owing to the fraudulent actions of the company or any of its representatives such as directors, employees, auditors, consultants, and so on.

Related parties transactions are business dealings with related entities. Following are the examples of related parties for a company:

a) purchase, sale or supply of any goods or materials;
b) selling or otherwise buying, or disposing of,  buying, property of any kind;
c) leasing of any kind of property;
d) rendering or availing of any services;
e) appointment of any agent for sale or purchase of goods, materials, services or property;
f) such related party's appointment to any office or place of profit in the company, its  associate company, or, its subsidiary company
g) underwriting the subscription of any securities or derivatives thereof, of the company:

Investors must cross-check these transactions to see if there are vested interests at play. For example, the company may sell a parcel of land at a throwaway price to the promoter entities. This results in a value transfer from the company to the promoter. It has been seen time & again that a lot of fraudulent activities are guised as RPT's and shielded from innocent retail investors.

Corporate Social Responsibility (CSR) is a company's commitment to ensure that there are positive social & environmental effects associated with the operations of the company. It seeks to strike a balance between economic, environmental & social imperatives.

India was the first country in the world to legally enforce CSR in 2014. The law is based on the premise that profit-making companies should contribute to society. It mandates companies to set aside two percent of their average net profit in the last three years for CSR purposes such as education, healthcare, etc.

The image below is an example of CSR spend of Avanti Feeds Ltd: 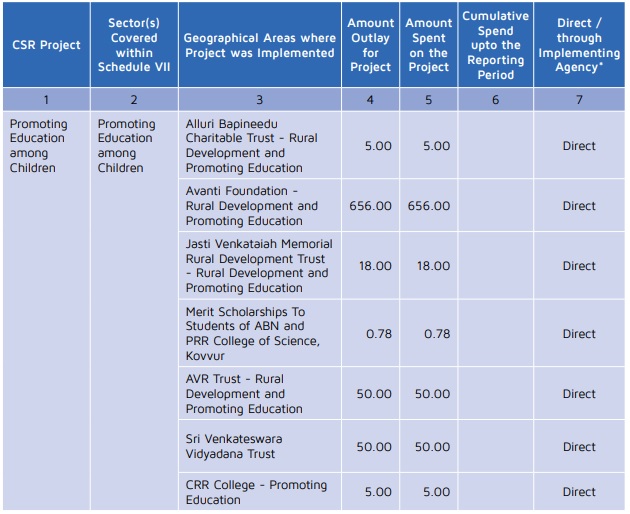 It is compulsory for listed companies to have sub-committees such as The Audit Committee and The Remuneration & Nomination Committee. Additionally, the law mandates the formation of a Stakeholders Relationship Committee to resolve the grievances of security holders for any company that consists of more than 1,000 security holders. Also, Companies with a net worth of more than ₹500 crores or turnover exceeding ₹1,000 crores or net profit exceeding ₹50 crores must constitute a CSR committee.

The Board of Directors may recommend forming other committees to assist them in the discharge of their duties.

As stated in The Companies Act, The Audit Committee must consist of at least three directors with Independent Directors forming a majority.

The Nomination & Remuneration Committee shall consist of three or more non-executive directors, at least half must be independent directors. The chairman of the company cannot head this committee.

The Takeover Code has certain provisions that make hostile takeovers relatively difficult by favoring existing shareholders & management. Listing norms make it mandatory to disclose the beneficiary in case his ownership in the company exceeds the 1% threshold.

The controlling shareholders can employ some commonly employed tactics such as Poison pills, Shark repellents, Pac-Man defense, Whitenight and Greenmail.

In India, takeovers are also subject to approvals from the Competition Commission.

As per the provisions of the SEBI's SAST Act, An entity buying more than 25% stake or in a listed company must mandatorily tender an open offer to buy an additional 26% in the company. Hence, an acquiring company will have a minimum of 51% in the target company post successful completion of the open offer.

Furthermore, controlling shareholders cannot buy more than 10% of the outstanding shares from the open market in a given year through the creeping acquisition method.

India's largest engineering & construction conglomerate Larsen & Toubro's acquisition of Mid-sized IT company Mindtree was supposedly the first successful hostile takeover in India. Larsen has two other listed entities in the same segment- L&T Infotech and L&T Technology Services. This move was described by the management as an attempt to de-risk the cyclical infrastructure business & consolidate the group's position in the services industry. Larsen currently owns about 60% of Mindtree.

Private companies have no restrictions as regards determining the director's remuneration & the process to be followed.

However, Public companies must adhere to the norms of the Companies Act. As per the terms of the act, the total remuneration payable by a public company to its directors in a particular financial year must not exceed 11% of the net profits of the company for that financial year.

Listed companies must disclose the remuneration details of every director in the annual report. As per the Listing Regulations, they must also report the ratio of remuneration of each director to the median employee's remuneration.

The senior management team comprises the highest level of managers in an organization, immediately below the board of directors. It includes KMPs such as CEOs, CFOs, Company Secretaries as well as all the functional heads.

In contrast to directors, the remuneration & appointment of senior management is governed by their respective agreements. No formal guidelines have been issued in this context.

The tone at the top determines the organizational culture. Public companies, Companies accepting public deposits, & Companies with borrowings exceeding ₹50 crores are mandated to establish a vigil mechanism for directors & employees to report genuine concerns from a corporate governance perspective.

The whistle-blower concept allows employees to alert senior management about any unethical practice against the company's code of conduct anonymously. The individual may also approach external authorities for redressal. Such information, if leaked publicly, might tarnish the reputation of the firm.

Listed companies must comply with a lot of disclosure formalities. They must periodically file the company's audited accounts, Board's report, Auditor's Report as well as the Annual Report with the Registrar of Companies as well as the Stock Exchanges.

Certain resolutions such as changes in directorship, changes in authorized share capital, conversion of warrants, advertisements issued by the company, court orders, amendments to the charter document must also be filled with the authorities.

Public companies must also adhere to The Listing Regulations, The Takeover Code as well as The Insider Trading Code.

Note: We have learned quite a lot of things related to corporate governance and its importance from this module. In India, every other company focuses on building a strong corporate governance structure in the organization. Despite these facts, there are several instances of corporate governance failure in India. So, let us go through some case studies in our subsequent units to better develop our understanding.