1) Yes Bank-  The heightened drama ensuing Yes Bank made it appear like it was straight out of a Wes Anderson feature film. Yes Bank was a market darling at one point in time and found a lot of flavor with Foreign Institutional Investors. The stock traded at a Price to Book in excess of 5 & was touted with the likes of HDFC Bank & Kotak Mahindra Bank. At its peak, Yes Bank had a market capitalization just shy of ₹1 lakh crore.

Creeks started appearing in this dream run when a number of agencies took a deeper plunge into the bank's books. The bank had been on a lending spree & had the highest proportion of loans to stressed companies such as The Essel Group & Anil Ambani Group of companies. It was highly unlikely that a stressed account had not taken a cheque from Yes Bank. The last one I promise, Rana Kapoor was the YES man to every troubled borrower.

The banking regulator got a whiff of the toxicity when there were huge divergences in NPA levels reported by the bank & those ascertained in the Asset Quality Review(AQR) program. Yes Bank reported a divergence of more than 300%. Yes, you have read it right!

In FY 2016-17 the bank reported Gross NPAs to the tune of  ₹2,019 crores. The number zoomed to ₹8,373 crores as per RBI assessments. Simply put, the bank's NPAs were under-reported to the tune of 5 percentage points.

Instead of plugging the loopholes, the bank made every attempt to downplay the situation. It further went on to highlight that most of these accounts had already paid back, some were sold to Asset Reconstruction Companies, or, ARC's & others were upgraded on account of satisfactory account conduct. The impact on financials was lowered to ₹485 crore from the ₹6,355 crore divergence reported earlier.

An old saying comes to my mind when I think of this debacle -There is no smoke without fire.

The Sheriff at Mint Street had been cracking the whip on 'Zamindar' CEO's like Chandna Kochhar at ICICI & Shikha Sharma at Axis. Rana Kapoor met the same fate when he was denied a three-year extension in August 2018. Kapoor was due to retire on 31st January, 2019.

The stock tanked heavily the day this news broke. 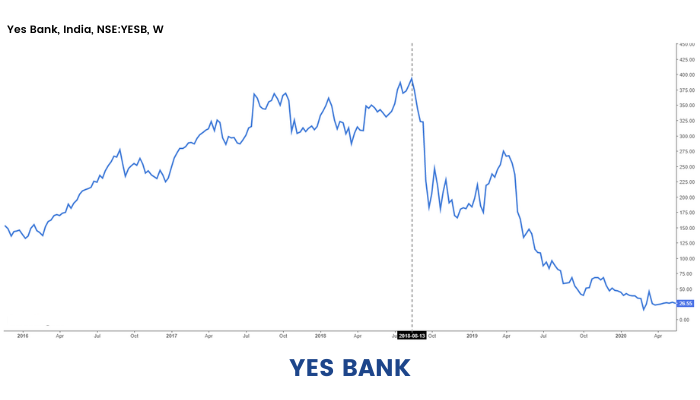 It was later clarified that the corporate governance issues in the bank persisted for a prolonged time. NPA's started swelling and doubled to 3.22% in Q4 FY 2018-19. The bank reported losses of ₹1,500 crores in the same quarter, it's first since going public in 2004. The NPA number further swelled to 18.89% in Q3 FY 2019-20 as more and more irregularities in advances were unearthed. Poor lending standards had been ailing Indian Banks since time immemorial & Yes Bank had just joined the party. And of course, Depositors started fleeing in large numbers & the company was in urgent need of a capital infusion. 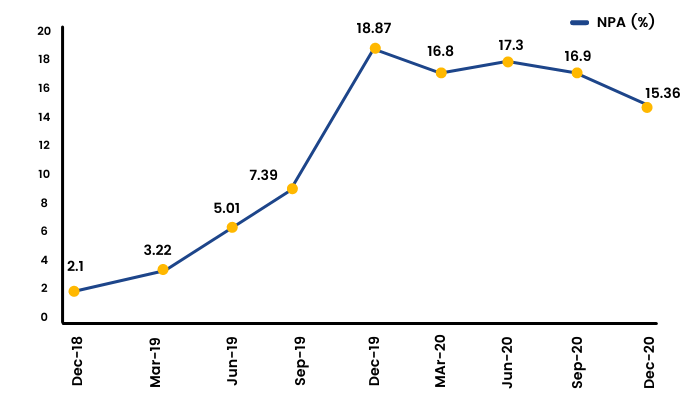 After struggling under the regime of Ravneet Gill- the new CEO, the bank was subsequently placed under moratorium in March 2020. A consortium of banks led by The State Bank of India bailed out Yes Bank. India's largest lender put in ₹7,250 crores & picked up a 49% stake in the ailing bank. The board was reconstructed & Prashant Kumar (Ex- CFO, SBI) took charge of the affairs. Since then, the bank is gradually attempting to rebuild its image.

Mr. Rana Kapoor is currently fighting several cases linked to money laundering using a number of shell companies. It is alleged that Mr. Kapoor took ₹600 crores in bribe for a quid pro quo investment of ₹3,700 crores in DHFL by Yes Bank. It is almost certain that many more skeletons will tumble out of Rana Kapoor's banking circle and more importantly he will be behind bars for a long long time.

A few pertinent questions however remain: