Once completing the background check on the promoters and their salaries, it is time to check any related party transactions occurring within the organization. So let us elaborate on this step further.

What do you mean by Related Party Transactions?

Related parties transactions are business dealings with related entities. Following are the examples of related parties for a company:

a) sale, purchase or supply of any goods or materials;
b) selling or otherwise disposing of, or buying, property of any kind;
c) leasing of property of any kind;
d) availing or rendering of any services;
e) appointment of any agent for purchase or sale of goods, materials, services or property;
f) such related party's appointment to any office or place of profit in the company, its subsidiary company or associate company; and
g) underwriting the subscription of any securities or derivatives thereof, of the company:

Investors must cross-check these transactions to see if there are vested interests at play. For example, the company may sell a parcel of land at a throwaway price to the promoter entities. This results in a value transfer from the company to the promoter. It has been seen time & again that a lot of fraudulent activities are guised as RPT's and shielded from innocent retail investors. 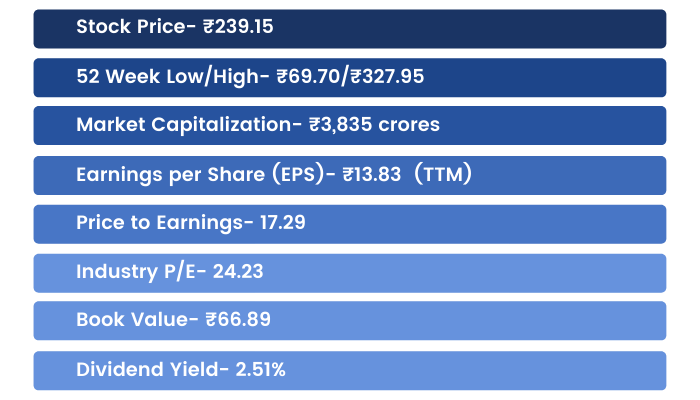 Appalled at the rise of Adani Green Energy, our team decided to conduct research on other companies that could replicate this move. We noticed that anything slightly related to the renewables theme was a sure shot multibagger, leave alone the fundamentals.  However, the stock of Sterling & Wilson Solar Ltd shared no such enthusiasm.

The company is a part of the Shapoorji Pallonji Group, a global conglomerate with 150+ years of EPC experience and local Engineering, Procurement & Construction (EPC) knowledge. Sterling & Wilson Solar Ltd has an enviable portfolio of 245 solar projects spread across 25 countries with an aggregate capacity of 10.6 GWp.

"The Company’s global reputation is reinforced by a well-established track record of executing complex & large-scale EPC projects, resulting in higher customer retention and a large percentage of repeat orders" 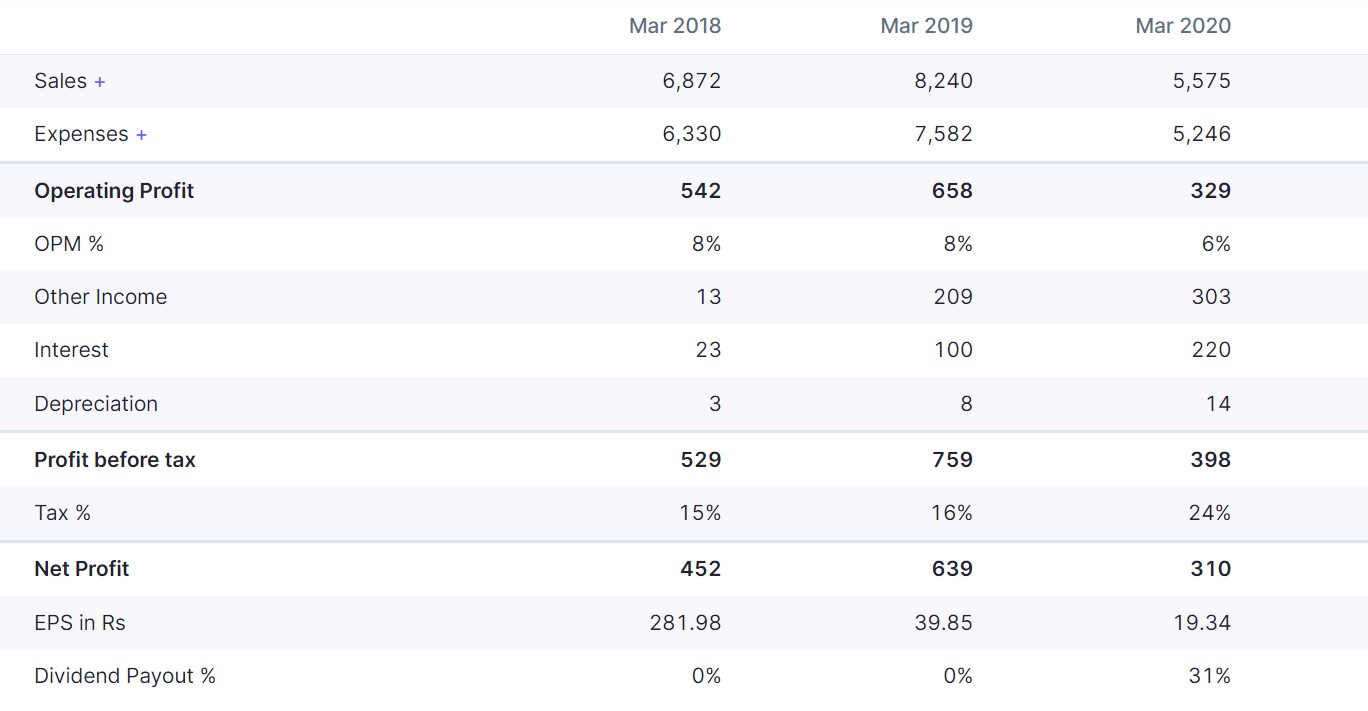 The company hit the bourses in the middle of 2019. The issue was priced at ₹780 & since then the stock has shed much of its market value. It is no doubt that the fundamentals are a little shaky with huge deviations on a QoQ as well as a YoY basis. The management clarified this pointer.

"SWSL being an EPC company, the revenue, orders inflows and gross margins could be lumpy due to geographical mix and stage of execution of the project in any particular quarter and hence comparison on corresponding previous period will not be true reflection and performance for a quarter may not be a representative of the full year"

We believed that it was a strong re-rating candidate.

The rationale behind our thesis:

The strong parentage is certainly reassuring. As consumers, It is natural for us to trust brands that have been in existence for hundreds of years. However, the same rule does not apply while making investment decisions. Upon greater scrutiny, we found the Achilles heel.

Here is an excerpt from the Company's Annual Report for FY 2019-20.

“We draw attention to Note 54 to standalone financial statements relating to extension in repayment period of outstanding inter-corporate deposits of ` 17,271.80 million (including interest accrued thereon of ` 1,708.20 million) as on 30 September, 2019 made to a fellow subsidiary by the Company from the 90 days period as stated in the Red Herring Prospectus dated 29 July 2019 for the purpose of Offer of Sale to public of Company’s shares by the Selling Shareholders. The Selling Shareholders have facilitated repayment of ` 14,576.23 million from the date of listing i.e. 20 August 2019 to 31 March 2020 as per the schedule approved by the Board of Directors. The inter-corporate deposits outstanding (including interest accrued) as at 31 March 2020 aggregate to ` 5,981.68 million. The Company has received queries from SEBI, Registrar of Companies, Mumbai (ROC) and certain shareholders regarding matters connected with delay in facilitating repayment of inter-corporate deposits by the Selling Shareholders on which the Company has submitted its replies. The Company has represented to us that, based on independent legal opinions obtained by it, it is of the view that there is no non-compliance with any laws and regulations by the Company in respect of this matter. We are unable to evaluate the impact of adjustments, if any, that may arise from this matter, on the standalone annual financial results of the Company”

The Statutory Auditors of the company M/S BSR & Co. LLP made the following comments in its audit report in connection to the outstanding Inter-corporate deposits. The entire episode began soon after the company became public in August 2019. Shapoorji & Pallonji group entities made an offer for sale (OFS) of existing shares and raised ₹2,850 crores from the IPO proceeds. The company had mentioned in its Draft Red Herring Prospectus (DRHP) that the funds would be utilized for repaying loans taken by the promoter from SSWL worth ₹2,563 cores within 90 days of its listing.

It has been more than one & a half years since then & the company is yet to receive the full payment. The promoter entities have thrice sought an extension in the payment deadline and it has now been revised to September 2021. The outstanding loan balance stands at ₹1,644 crores as of December 2019. 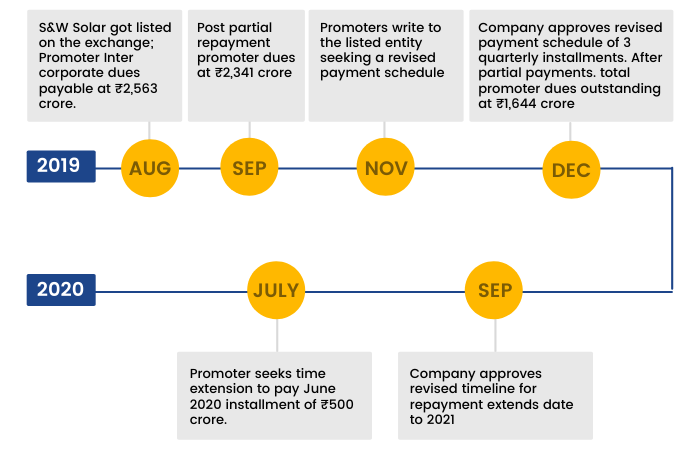 The promoter groups have already offered assets worth ₹1,200 crores as security in addition to a 400 bps penalty on the rate of interest but the scars run deep.

This debacle has caused a huge loss of reputation to the promoter group. Minority shareholders have lost over ₹1,800 crores as a direct consequence. These loans are good as of now and the management is confident of recovering them. But what happens when there is another downcycle & the SP group faces trouble raising money? Will SSWL again bailout the promoter at the cost of the retail shareholders?

Things don't stop here. The company claims to have a diverse board by only hiring executives from the Parsi Community, even the Independent Directors!  It passed a set of controversial resolutions in its AGM for FY 19-20. These pertain to the re-appointment of Mr.Pallon Mistry & Ms. Keki Elavia as director & independent director respectively. Non-promoter shareholder groups have accepted these resolutions despite many proxy advisory firms advising them to vote against them. The related party transactions & loans to promoter groups are a serious cause of concern.

Have a look at the web of transactions. It is a tedious task for auditors & investors to untangle such complex corporate structures and track the funds flowing in & out of the company. 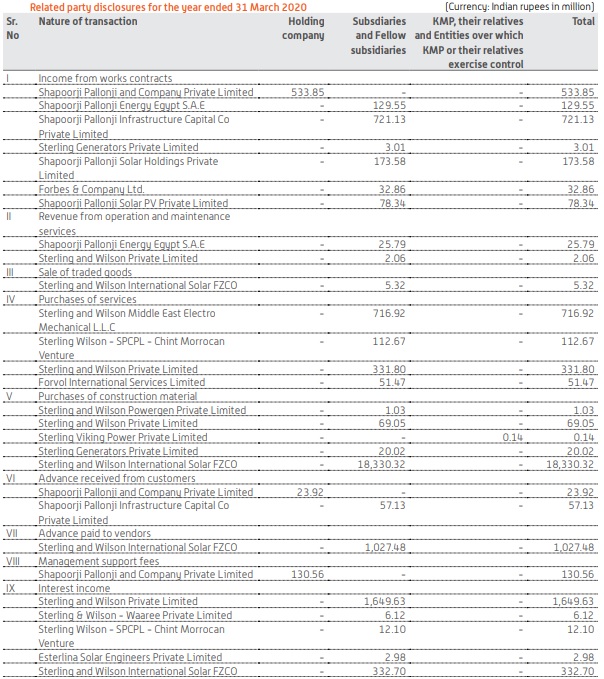 These transactions are just a fraction of the total number of related party transactions. This point was also red-flagged by the Statutory Auditors of SSWL:

The company has also received shareholders' nod to bid for projects jointly with other group firms. This point was listed as Item No.6 in the special resolutions passed in the AGM. The statement read:

"Shapoorji Pallonji and Company Private Limited (''SPCPL”) is the holding company of the Company. Wherever the Company does not possess the required pre-qualification in terms of tender requirements, SPCPL and/ or its group companies become a consortium member to enable the Company to participate in the bids jointly. Such transactions with SPCPL and its group companies (''SPCPL Group”) include receipt of income from works contracts and purchase of various services. Under the provisions of the Companies Act, 2013 (‘the Act’) and SEBI Listing Regulations, such association falls under the ambit of related party transactions (''RPT”). Further, if the aggregate value of those transactions exceed materiality threshold prescribed under the law, the members of the Company need to accord their approval by way of a resolution. Thus, the Company has had such above said RPTs and envisages future RPTs with SPCPL Group in the ordinary course of business and/or on arm’s length basis"

We can only wonder about the "pre-qualification" that the company does not satisfy. The company isn't small by any means. The decision of colluding with promoter entities for joint bidding is certainly not in the best interest of shareholders. The first question that springs to my mind is how will the profits from such ventures be appropriated? Investors will keenly watch out for any development in this regard.

The bottomline however is that if an investor carefully analyzes the Related Party Transaction section of the Annual Report, he can spot promoter misbehaviour at a very early stage & protect his hard earned wealth from negative surprises later on. In almost all instances of corporate governance failures, the related party transactions have had the cues- whether it was dirt-cheap loans to the promoter, purchase of promoter’s assets at sky high valuations, or anything of that matter.