Now let us get back again to the cricket example and understand the different types of moving averages. If we assume that Virat Kohli didn't play the first five matches, and was there only for the last five, will it be correct to assess the probability that the 11th match average will be around 166 runs? Instead if we put up a logic,  that we can give more weightage to the last five matches where Virat Kohli played, and a lesser weightage to the first five matches, then the 11th match average justifies a more logical number.

As most of us know, Technical Analysis is not just about looking at charts and patterns of a stock and coming up with a buying and selling decision. It is more about understanding the psychology of people which creates the demand and supply zone. To become a good technical analyst, we need to understand the markets and its dynamics, with the traders psychology behind the stock’s price.

We can have two broad categories of Moving Average.

SMA is simply the mean, or average, of the stock price values over the specified period. The closing price value is usually taken for its calculation, however traders can calculate the average using the high or low prices too.
In my opinion, SMA’s are not very practical because they give equal weights to every price data point. However in real life, markets are very dynamic, the psychology of investors keeps changing every day, hence the psychology, ten days earlier in the market may not be the same as the previous day. So in order to overcome this, traders mostly use the exponential moving average.(EMA)

With reference to the traders psychology and market dynamics we can say that the last day’s price of a stock should be given greater weightage than the first day. EMA uses the method of calculation where the most recent prices will have the greatest weights compared to the older prices. As the data gets older, the weights diminish. This is why the EMA gives a better picture of the average to a trader compared to the Simple Moving Average.
However it is not wrong to use a SMA, it is just that the EMA gives a clearer picture. 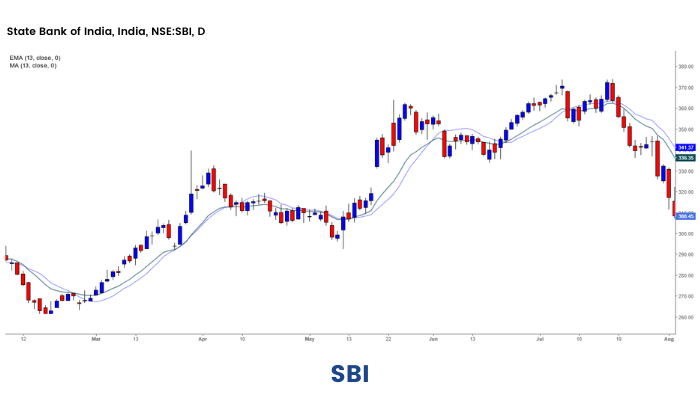 In the image above, 13 period EMA and SMA both have been plotted. We can see that there is a minor difference between both the averages.