Previously we have covered the concept of the moving averages and their types. But it is still unclear which moving average to consider while trading? So let us understand in this section.

This is a dilemma faced by many people in the markets. Moving average is an indicator which is like the oldest priest in the temple, the more we understand the dynamics, the more we are able to comprehend prices in a better manner. We should understand that moving averages are associated with time frames.

If we are a long-term investor, we will not be worried about the 13-day average prices. The focus will be more on a longer time frame. Similarly, a short-term swing trader will look at a 5 or a 13-day moving average.

There is no definite number that tells us which moving average is the best. Some sets of moving averages work well for some people while it may not work for some. One has to access the trading style to decide which time frames to use.

The standard practice used by various traders and investors for moving averages is given in the image below. 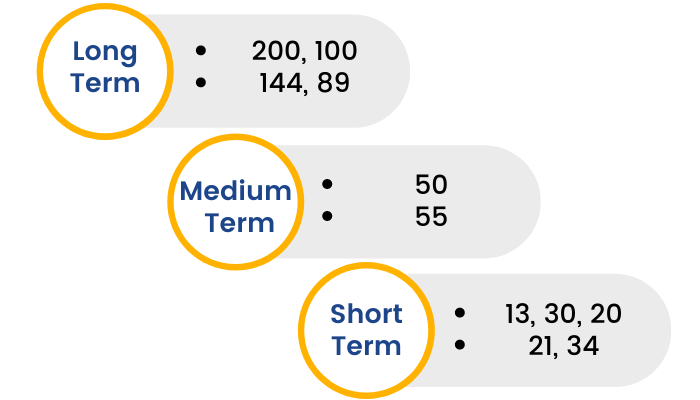 Please note that according to the Dow Theory, a 200-day moving average is considered to be a very important measure because of the simple logic that there are 200 trading sessions in a year. People also follow a 100-day moving average widely because it symbolises trading days half yearly.

As we all know, Fibonacci numbers’ importance in the study of Technical Analysis is very important. It has been observed in the past that if we alter the moving average to the closest Fibonacci number, it tends to work slightly better.

For example: There are 20 trading days in a month, and we have 21 as a fibonacci number. So we can use either a 20 or a 21 period Moving average. However, 21 periods will portray a better picture. The image shared above depicts all the corresponding closest fibonacci numbers with respect to the normal time frames. A trader can use 13, 21 and 34 periods to depict the trend in the short term and all of them are fibonacci numbers too!

Note: Don't worry if you are unaware of Fibonacci numbers. We have prepared a separate module on Fibonacci called The world of Fibonacci, which you can go through by clicking here.