What is Ratio Analysis and Why is it Important?

Ratio analysis involves the method of calculating and interpreting financial ratios in order to assess the strengths and weaknesses underlying the performance of an enterprise. Ratios are expressed either as percentage, proportion or fraction. The basic rationale behind ratio analysis is that one cannot simply compare the balance sheet or income statement numbers across two companies.

Thus, we bank on ratios to compare the income statement and balance sheet numbers across companies & industries. Similarly, it becomes difficult to track the year-on-year (YoY) performance in absence of financial ratios. Thus, ratio analysis helps to do both inter firm and intra firm comparison.

There are two main types of ratio analysis:

One of the most important facets of ratio analysis lies in the selection of an appropriate comparable. The two companies whose ratios are compared should be of similar size/ business model.

Thus, the selection of the appropriate benchmark ratios is one of the keys to do successful ratio analysis.

For example, one cannot compare the ratios of ITC and HUL even though they both are in the FMCG business.

As a matter of fact, ITC derives more than 42% of its revenues and a startling 74% of its Net Profits from the Cigarette Division in FY21.

On the other hand, HUL is a pure-play FMCG company deriving over 75-80% revenue from its FMCG products. Since, the core business of both the similar looking companies is different thus one cannot compare the ratio of ITC with HUL.

Some major types of financial ratios that analyst uses are classified as: 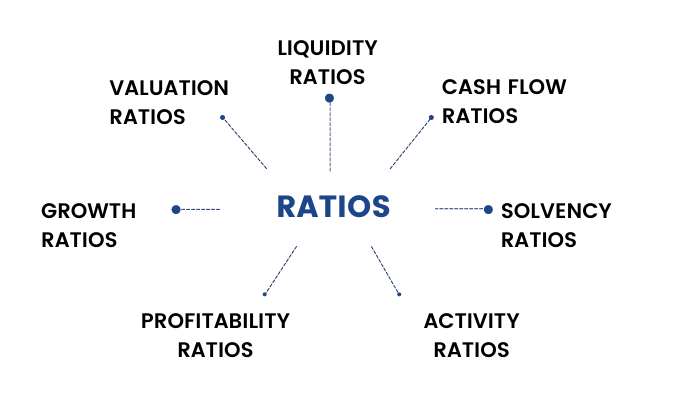 We will learn each of these ratios & their usefulness in our upcoming units of this module.