First, let us understand the 'Moving averages,' one of the most popular indicators in technical analysis.

What are Moving averages?

Chart patterns usually show a lot of variation in price movement. This can make it difficult for traders to get an idea of a security's overall trend. One simple method traders use to combat this is to apply moving averages. A Moving Average is the average price of a security over a set period of time. By plotting a security's average price, the price movement is smoothed out. Once the day-to-day fluctuations are removed, traders are better able to identify the true trend and increase the probability that it will work in their favour.

Example: For a 5-day Moving Average you simply add the closing prices of the last five closings and divide this sum by 5. For each consecutive day you add each new closing price and skip the oldest. Thus, the number of closing prices considered always remains constant at 5 daysOne of the most common and familiar trend-following indicators is the moving averages. They smooth a data series and make it easier to spot trends, something that is especially helpful in volatile markets. They also form the building blocks for many other technical indicators and overlays. 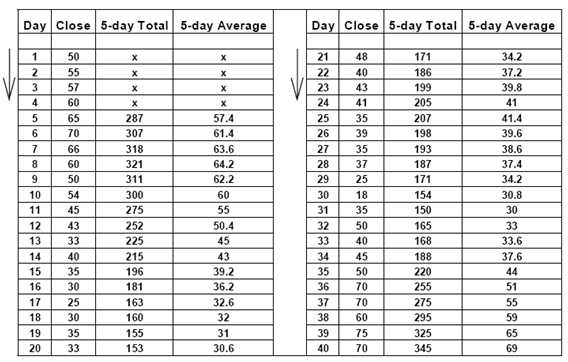 However, whether you choose a 10-day average or a 40-week average, the method of calculation is the same; instead of adding 5 days, you add the closing prices of 10 days or 40 weeks and divide the sum by 10 or 40 respectively.

What are the different types of Moving Averages?

A simple moving average is formed by computing the average (mean) price of a security over a specified number of periods. It places equal value on every price for the time span selected. While it is possible to create moving averages from the Open, High, and Low data points, most moving averages are created using the closing price.

For example: A 5-day simple moving average is calculated by adding the closing prices for the last 5 days and dividing the total by 5.

The formula for an exponential moving average is: