The world of Fibonacci

Fibonacci analysis is the study of identifying potential support and resistance levels in the future based on past price trends and reversals. Technical traders attempt to use it to determine critical points where an asset's price momentum may reverse. It is a powerful tool when used in conjunction with other indicators or technical signals. Fibonacci relationships apply on the asset both in time and amplitude.

Let us discuss in detail what is a Fibonacci Sequence and then how it can be used effectively in the field of Technical Analysis.

What is Fibonacci Sequence?

The Fibonacci sequence was invented by Leonardo Pisano Bigollo. He was also known as Leonardo Fibonacci. The Fibonacci Sequence is the series of numbers that starts with the number 0 followed by 1. The next number is obtained by adding up the previous two numbers in the series.

What is the Golden Ratio?

An interesting property of this Fibonacci series is that if you simply divide any number in the series by the previous number, the ratio always comes to 1.618; which is considered as the Golden Ratio also referred to as ‘Phi’

This golden ratio can be observed around most of the things in the universe, from music, to ancient designs, to nature like flowers, clouds etc.

The Fibonacci sequence in nature can be observed in nature by counting the number of petals of flowers. The number of petals in most of the flowers which we see are a fibonacci number, usually in pairs of 5,8,13 and so on. Another example can be seen in pine cones. If you count the number of spirals going from the center of the cone (where it is attached to the tree) to the outside edge. The resulting numbers are usually two consecutive Fibonacci numbers. 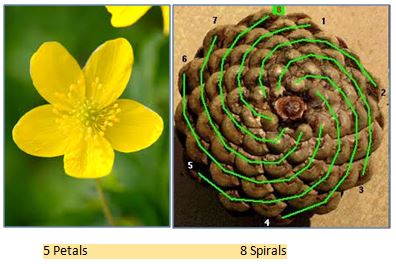 The number of petals a sunflower contains is from the Fibonacci series. It is sometimes 89 or else 144. Moreover it has a golden spiral seed arrangement also.

So we can conclude that the Fibonacci series is all around us in nature.