First & foremost, it's time to get familiar with India's Achilles Heel- Crude Oil.

India is the world's third-largest importer & consumer of Crude Oil after The USA & China. Crude Oil is the second major source of primary commercial energy in India after coal. The country meets more than 80% of its requirements through imports. The Crude Oil Import Bill for FY2020 stood at $102 billion.

India’s economic growth is closely related to its energy demand, therefore, the need for Oil & Gas is expected to increase at a steady pace for many years to come. According to some reports, Crude Oil consumption in India is expected to touch 500 million tonnes by FY2040, from 227 million tonnes in FY2020 implying a CAGR of around 3.5%. 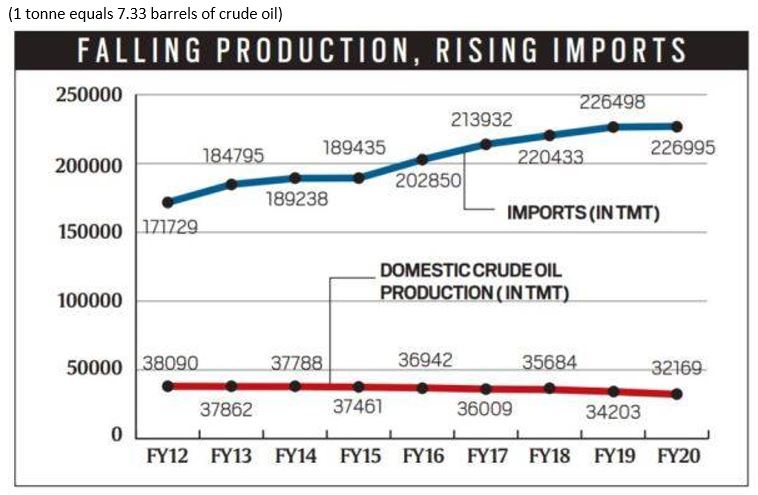 The domestic production of Crude Oil has virtually stagnated over the years. India is producing less & less oil with every passing year. Experts have blamed the steady decline in production on ageing wells that have become less productive with time coupled with the lack of new oil discoveries in the country.

Many industries depend on healthy crude oil prices for their smooth functioning. Any adverse change in prices might erode the profit margins of companies operating in sectors such as Automobile Ancillaries such as Tyres & Lubricants, Aviation, Chemicals, Footwear, Paints, Plastics and others.

A rise in Crude Oil prices worsens the Trade Deficit which in turn affects the Current Account Deficit (CAD) since the country largely relies on imports to meet demand. According to some estimates, every $10 per barrel rise in crude oil worsens India's CAD by 0.5% of the GDP or $15 billion. A widening CAD puts pressure on the Rupee's value vis-a-vis foreign currencies. A similar magnitude of price change would also impact the GDP by 20 to 30 basis points.
Note: If you are confused with the term GDP, worry not. We will elaborate on the concept of GDP in Unit 4 of this module.

At this stage, the vicious cycle starts to hit the common man rather acutely. Surging oil prices spill over to the consumer basket of goods & services as a cascading effect. Ultimately labourers start demanding higher wages & the economy witnesses an inflationary spiral.

To combat inflationary pressures from rising prices, the Central & State Governments are forced to slash excise duties that lead to lower tax collections. Topping it, the subsidy bill for Kerosene & LPG cylinders goes up. A $10 increase in crude oil prices burdens the fiscal headroom by about $2 billion or ₹15,000 crores- in the form of cooking fuel subsidies.

The net result of all the furore is that India remains at the mercy & behest of OPEC nations for its economic well-being.

In this regard, it is imperative to get the idea that these factors are not congruous across the spectrum. Every economy has its inherent strengths as well as pain points. For instance, Oil-Rich Gulf Nations such as Saudi Arabia, Oman, Qatar, Bahrain, and others.