This section will discuss the sixth factor that affects the stock market, which is movements in the exchange rate, especially INR/USD.
It must be assumed here that we are using the INR/USD rate as a reference for our study.

Before delving into this topic, investors must understand that various micro-units of the economy work in sync with each other. Case in point- It is likely but not necessary that high GDP growth is accompanied by a loose monetary policy which in turn is followed by Inflation. It is not concrete that inflation is spurred by low-interest rates. The oddly high number can be a result of supply-side mismatches. The way our economy is closely knitted, there is always a cause-and-effect theory in action.

Coming back to our point of contention, The Forex Market is the largest as well as the most liquid financial market in the world, traded globally by a large number of individuals & organizations. With a daily trading volume in excess of $6.6 trillion, the magnitude is much higher than the equity market. The majority of forex trading takes place on forward markets instead of exchanges like the NSE and BSE. The EUR/USD currency pair is the most widely traded pair in the forex market. In fact, the US Dollar is the most traded currency as well making up 85% of all transactions!

As you must have noticed, exchange rates are not as volatile as stocks. Hence, the notional outstanding value of transactions is exceptionally high. Not even in the wildest dreams can one think of a 20% gap-up opening when it comes to currencies.

So, what moves Exchange Rates?

For the purpose of this module- we will be dwelling upon the former three:

a) Inflation- Differences in the rate of inflation between two countries are one of the primary reasons behind exchange rate movements. The currency of the country with a higher rate of inflation is expected to depreciate in value. One can also think about this idea in terms of demand-supply analysis. Inflation might be a result of an excess money supply in the economy. Simply put, the supply of currency is high. Other things unchanged, a rise in supply leads to a drop in the price of the currency.

Similarly, a country with a lower rate of inflation exhibits a rising currency value.

We can find out the exact expected inflation using Fisher's Approximation:

Thus, it is expected that the INR will depreciate by approximately 2.94% against the USD in the next year.

Earlier in this module, we had hinted at how a Falling Brazilian Real nullified the resilience in the BOVESPA Index.

The graph below depicts the Annual Inflation Rate in Brazil from 2011 onwards: 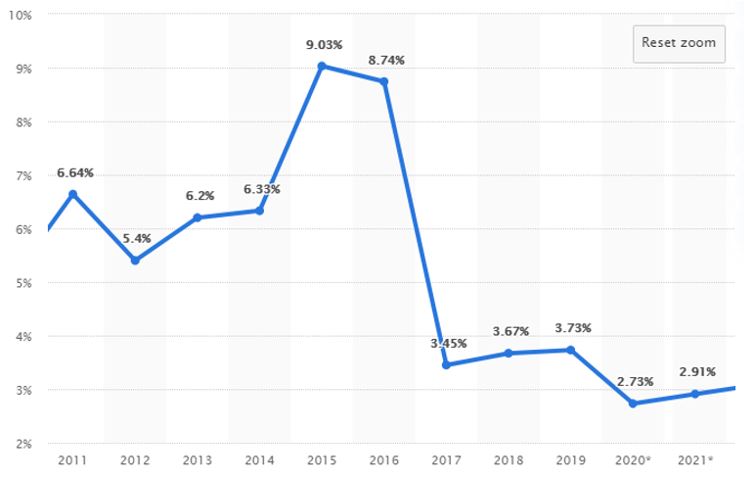 Meanwhile, Inflation in the US during this period averaged around 2% & this explains the unabated fall in BRL/USD exchange rates. We can safely say that the Brazilian Stock Market has underperformed on all counts after taking into account the impact of Inflation.

b) Interest Rates- The key takeaway here is that Inflation, Interest Rates & Exchange Rates are all correlated with each other. A Rise in the domestic Interest Rate Level leads to an appreciation in the value of the home currency and vice-versa.

The logical reasoning behind this is no different either. High-Interest Rates lead to a fall in the demand for money. The total amount of currency in circulation reduces and hence, it is accompanied by a rise in the value of the currency. Another argument to support this proposition is that high interest rates may lead to a gush of capital inflow in the country as investors find it lucrative to park their surplus funds at higher yields.

c) Political Stability & Economic Performance - Foreign money favours countries that have a strong economy and a stable currency. The higher the capital inflows, the stronger is the currency.

The context of political stability becomes extreme especially while analysing emerging market currencies. It has been observed time and again that currencies of countries with grave political unrest have significantly underperformed their peers, Case in point- Zimbabwean Dollar, Venezuelan Bolivars (VEF), Turkish Lira (TRY), Syrian Pound (SYP), Egyptian Pound (EGP) and the like.

The Hyperinflation experienced by Venezuela has reduced the status of VEFs to nothing but toilet paper. The hard currency crisis is so acute that it has given birth to a thriving black market for USD.

The TRY was making headlines a little while ago when its currency shot up after Recep Tayyip Erdogan, President of Turkey fired the Central Bank head, Naci Ağbal after a brief stint of four months. The country is already in the midst of an economic crisis. 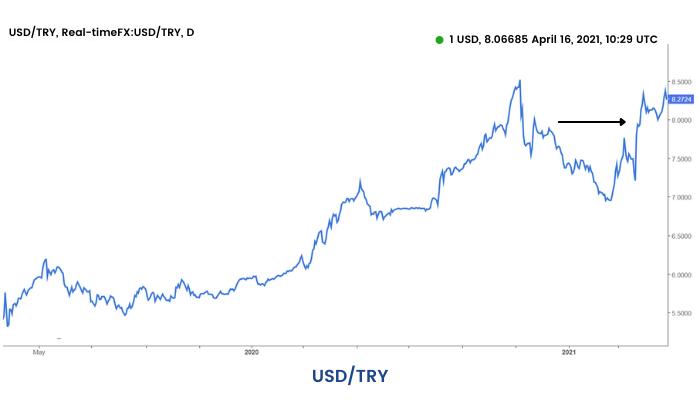 Now that we have established some foothold on this topic let us shift our focus back to equity markets and figure out how the two tango.

An open economy has trade relations with almost all countries in the world. When the value of the home currency depreciates, it makes domestic goods more competitive in the global market. Exporters tend to benefit as they can now fetch an increased value for their goods and services. The positive rub-off is visible in Information Technology and Pharmaceutical companies as they derive a maximum chunk of their sales from exports.

Quite logically, Companies that Import raw materials from abroad are adversely affected by a depreciating local currency as it increases their costs of imports. Importers have to shell more to purchase the same quantity of goods & services. Companies with foreign currency loan exposure on their balance sheet also tend to lose out if there aren't any hedges in place.

The Indian Equity markets are excessively susceptible to Foreign Institutional money. A report by the NSE for the quarter ended March 2020 pegs Foreign Institutional holding in the NSE-listed universe at around 20.8%. The number has only gone up since then owing to the fresh influx of foreign funds after the pandemic struck.

Foreign Investors are spooked by the prospect of exchange rate losses as it eats into their real returns. Capital outflows accelerate rapidly when the domestic currency drops and this is precisely why we refer to foreign flows as "hot money".