Economic growth requires capital investment. Banks are the primary source of capital for firms. However, with the modernization of the Indian economy and capital constraints faced by the banks, the significance of the alternate source of raising capital through debt and equity has gained predominance. Funds raising through public issues remains a principal route for financing business growth, without which the development of the Company is hindered. The majority of the companies that have gone public have shown remarkable growth in performance & profitability. This module focuses on equity capital raised through Initial Public Offerings (IPOs).

The primary market is involved in the issue of fresh securities such as stocks and bonds for sale to the public. The primary market serves as a medium for corporations to borrow money from investors with surplus cash.

When a company decides to go public, it decides to go for an Initial Public Offering or IPO through the primary market route. A company may need to raise capital for various uses including: expansion of business, foraying into newer markets, to meet their working capital needs, paying off debts, investing in a project, etc.

Issues through the primary market can be allotted either privately or publicly.

For Example: Company A Limited requires funds. It issues shares in the primary market. When the company issues shares for the first time, it is called Initial Public Offering (IPO). A further issue of shares is known as Follow-on Public Offer (FPO). Both IPO & FPO issuances fall under the ambit of Primary Markets. 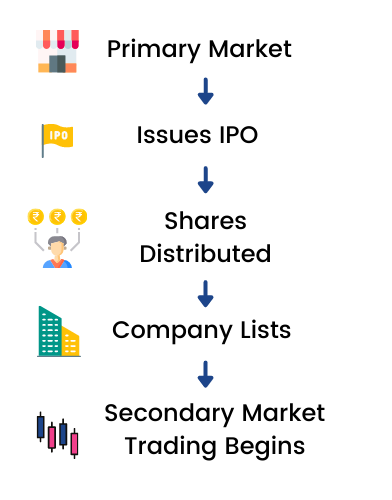 Secondary Market refers to the market where securities are traded after being initially offered to the public in the primary market and/or listed on the Stock Exchange.

The Secondary Market is further classified as follows:

What is an IPO?

The Company offering its shares is called the Issuer.

Once an IPO is offered to the public, it is subsequently subscribed by the investors. The company will receive money from the investors in exchange for shares issued. The company can use these funds to finance project expansion, pay off debts, working capital needs, acquisitions, etc. Investors, in return, expect a share of the company's future profits through dividends and capital growth through stock price appreciation.

Post the issue of shares, the shares of the company subsequently get listed on the stock exchange (secondary market) and are freely traded.

Though we have understood- what is an IPO? But No wonder why do even companies go public? Let us understand that in the next unit.