Infrastructure Leasing & Financing Services (IL&FS)- Infrastructure financing is as murky as it gets. All infrastructure projects come loaded with a basket of risks that most lenders choose to steer clear of- long & protracted implementation, natural calamities, regulatory delays, cost escalations, additional debt servicing, & the most fatal - the risk of a market cycle turning sour.

Il&FS was set up in 1987 with an objective to finance large scale infrastructure projects for ensuring sustained economic growth. The group was once hailed as the pioneer of Public Private partnership (PPP) in India. IL&FS is a core investment company registered under the RBI and one of the Systemically Important Financial Institutions (SIFIs) in the country.

The IL&FS group was being run like a virtual ponzi scheme. The board believed in the magic powers of the chairman to call for additional credit lines in times of distress & boom- problem solved.  This myth bursted in September, 2018 when a lot of red flags started surfacing. The Group began reeling under its massive debt burden when two of its subsidiaries were facing trouble in repaying Loans & Inter-corporate deposits in July. The chairman, Ravi Parthasarathy quit the firm in the same month citing medical reasons after staying at the helm for 30 years. The outgoing leader gifted himself a 144% salary hike as a parting memory.

Markets were in a state of panic & punished Banking & NBFC stocks black & blue. Leading the stash was Dewan Housing Finance Limited aka DHFL which defaulted soon after the crisis broke out. Indiabulls Housing Finance was also in a tough spot & painstakingly managed to stay solvent. The year of 2019 was the worst in nearly a decade for NBFCs as their primary sources of funding had nearly dried up. Banks & Mutual funds were unwilling to lend & there was an acute liquidity crisis.

IL&FS Financial Services informed the BSE on 27th September 2018 that it defaulted on ₹152 crores of short-term deposits & term deposits. The government took control of the beleaguered firm on the first of October & appointed Uday Kotak as the Chairman of the board.
At the heart of Il&FS's problems lies its tangled corporate structure. The Il&FS group houses 256 group companies including its subsidiaries, JV's and other associate entities. Only three of IL&FS group entities were listed on the stock exchanges & the intermeshing nature of the financials make it quite obscure for any meaningful scrutiny.

The holding company managed to pull off the dead weight of unfinished infrastructure projects & burgeoning liabilities for quite some time. In the three year period from FY 2014-15 to FY 2017-18, the consolidated debt at the group level rose 44% to $13 billion. The Debt to Net Worth ratio of the entity stood at 13:1. Credit Rating Agencies had simply turned a blind eye to all of these negative developments surrounding the company & consistently rated it as AAA. It essentially means that the default probability of IL&FS was close to zero.

According to a report by Grant Thornton on the IL&FS fiasco,

Once again, the usual drama ensued. The market regulator slapped token fines worth ₹1 crore each on CARE Ratings, ICRA & India Ratings in September 2020. The Ex-CEO Hari Sankaran is behind bars & now the legal proceedings shall stretch a few more dozen years.

The IL&FS scandal was a systemic failure. A massive fraud engineered by the chairman Ravi Parthasarathy who colluded with his crony managers to route hard-earned taxpayers' money through various financial institutions & a web of shell companies.  It is shocking that a board with the brightest business minds such as RC Bhargava &Jaithrith Rao were inept to report the rotten practices in the company.

Shareholding pattern as of March 2018: 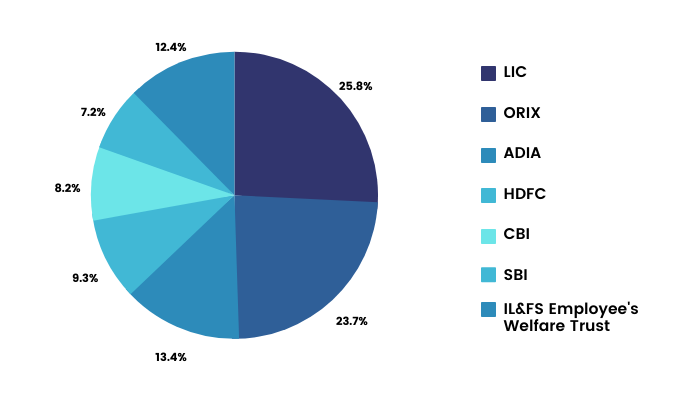