Rich Dad Poor Dad is about Robert Kiyosaki and his two dads—his real father (poor dad) and the father of his best friend (rich dad)—and the ways in which both men shaped his thoughts about money and investing. You don’t need to earn a high income to be rich. Rich people make money work for them.

The rich father in this book teaches two small boys some invaluable lessons about money through their own experiences. The most important one is undoubtedly to understand on how to best use your mind and your time to create your own wealth through business and investments.

Get out of the rat race. Learn how to seize opportunities, find solutions, take care of your business and investments and most especially, learn how to make money work for you and not be its slave!

According to the author,the traditional schooling system lacks proper education in the financial field. Normally schools focus on building professional skills and not financial skills. This shows that how smart students, who have become smart professionals in their respective fields, struggle when it comes to handling their finances.

The authors ‘Rich Dad’ is his childhood friend, Mike’s Dad. He taught him lessons about money and finances throughouthis life. He noticed that both of his dads- his father and Mike’s father, worked hard but when it came to money matters, his dad never used his brains for financial advantages.Therefore he is referred to as the “Poor Dad”

There was a time when the ‘Rich Dad’ was broke due to major financial setback but he continued to refer himself as a rich man. He stated that there is a difference between being poor and being broke, he said, “Broke is temporary, poor is eternal”.

The author was motivated by his rich dad to understand how ‘Money’ works and how to makeit work for him. 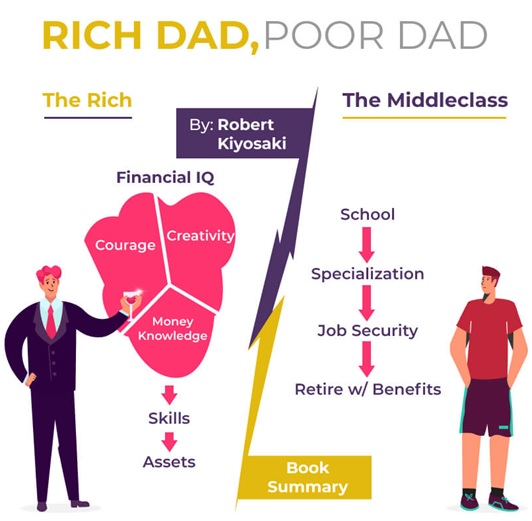